An astounding 82% of today’s consumers say speed of service is the number one factor to a great customer experience. And as businesses increasingly seek ways to improve their customer service, many have turned to virtualization and self-service. Airlines use self check-in, restaurants allow customers to make their own reservations, and grocery stores have self check-out lines—the list goes on.  In the case of contact centers specifically, 62% of best-in-class companies use interactive voice response platforms in some capacity to facilitate the delivery of fast but relevant customer service.

END_OF_DOCUMENT_TOKEN_TO_BE_REPLACED The customer service space has undoubtedly evolved over the past several years, and the momentum is not expected to slow down as artificial intelligence (AI) continues to advance. AI-powered voice recognition software—known to the customer service space as the “virtual agent”—has already made its way into many of today’s contact centers, replacing live agents to assist clients with a variety of tasks and inquiries. Coupled with the proliferation of messaging apps, many are also beginning to see the development of chatbots—software programs that use messaging as the interface through which to carry out any number of tasks, from checking an account balance, to making a reservation, to helping users buy a pair of shoes. Virtual assistant startup, Interactions, recently secured an additional $56 million in funding, indicating that the trend is certainly picking up speed.

END_OF_DOCUMENT_TOKEN_TO_BE_REPLACED

Is the call center agent doomed for extinction? By 2020, the customer is expected to manage 85% of their relationships with a business without interacting with a human—something that should come as no surprise when considering the rising popularity of self-service channels across the web, mobile apps, and voice (IVR). As a matter of fact, Forrester recently conducted a survey, which revealed that web self-service (through online knowledge bases) is now the most commonly used communication channel for customer service, the first and only channel to exceed voice in history. And as mobile device adoption continues to expand and consumers increasingly demand fast and effortless engagement with the businesses serving them, many have been left wondering—will alternative touch points soon cause the call center agent to become non-existent?

END_OF_DOCUMENT_TOKEN_TO_BE_REPLACED 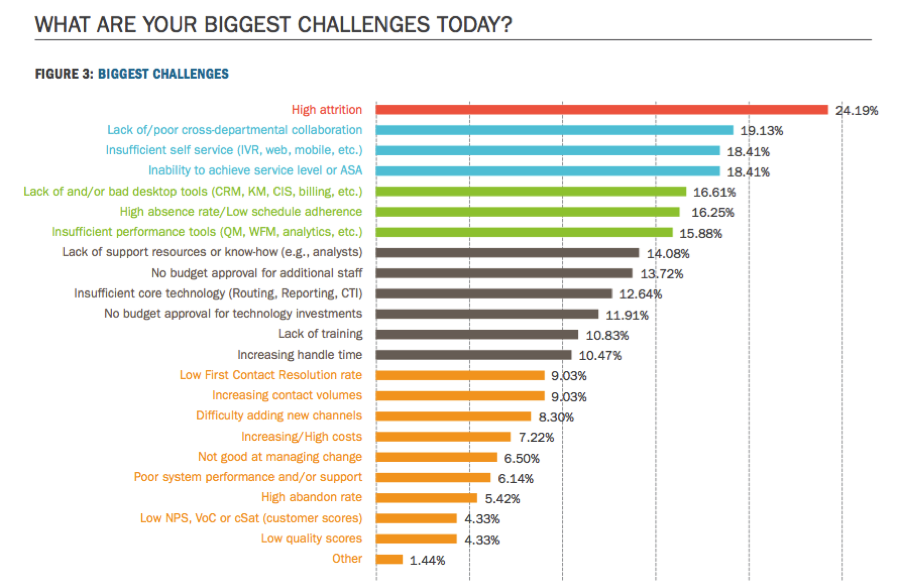 Each New Year brings its own set of unique opportunities to the contact center space, both from a technological standpoint as well as an operational one. And as businesses continue to adopt the latest solutions and best practices to support their employees, customers, and organizations as a whole, many continue to run into challenges piecing everything together and making good use of it all. But what are some of the challenges contact centers are anticipating in the coming months? And how can businesses more effectively manage what they have and mitigate the risk of a potential issue? Let's check out the findings of Contact Center Pipeline’s recent survey, “Contact Center Challenges & Priorities”, revealing some of the biggest challenges for organizations today—and how to alleviate them in 2016.

END_OF_DOCUMENT_TOKEN_TO_BE_REPLACED

The contact center space is changing. So what should one expect in 2015?

Continued Implementation of Self-Service: Recent studies have shown 67% ofcustomers prefer self-service over speaking to a live representative, which has its benefits when considering self-service interactions are 200-300% less expensive than those handled by a live agent. While the use of live agents is not expected to decrease, the importance and extended use of self-service is likely to be a continued theme next yar.

Growing Deployment of Cloud Infrastructures: By 2015, cloud computing spending is projected to reach 155 billion, compared to 46.4 billion in 2008. And according to DMG Consulting, cloud-based infrastructure is the fastest growing area for the call center industry, predicted to almost double between 2013 and 2015. When compared to premise-based solutions, contact centers based in the cloud have experienced 27% reduction in annual contact center costs and a 35% improvement in uptime. Offering superior reliability, scalability, and cost-savings, cloud adoption shows no signs of slowing down anytime soon and likely to continue its successes in 2014 well into 2015 and beyond.

END_OF_DOCUMENT_TOKEN_TO_BE_REPLACED

See all
© Copyright 2020 by 3CLogic. All rights reserved.